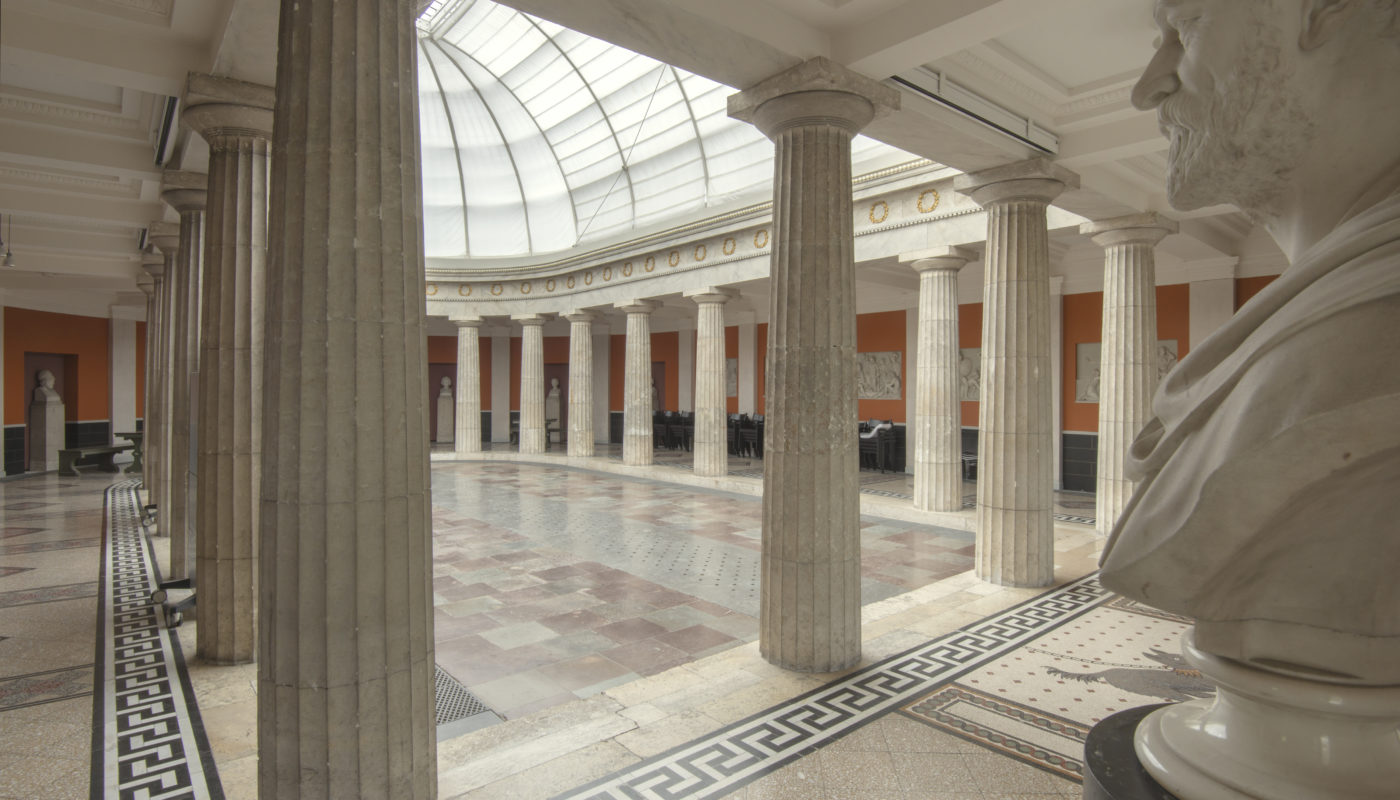 Elgaard Architecture is responsible for the interior refurbishment and restoration of Carlsberg Academy, formerly known as the Honorary Residence, which is located next to the old Carlsberg breweries in Valby in Copenhagen. The brewer J.C. Jacobsen (1811-87) had the villa erected for himself and his family in 1847-53 (main house and Winter Garden) and 1876-78 (the greenhouse Pompeii). The photo above shows Pompeii before the restoration.

The Brewer’s House Is Revived
As a house architect for the Carlsberg Foundation, Elgaard Architecture is developing Carlsberg Academy in order to improve the conference facilities, while at the same time once again place the story of the brewer and his home at the centre stage of the house. The greenhouses and the villa’s interiors are being restored, and the logistics of the house are improved by installing a goods lift that connects the basement’s satellite kitchen to the ground floor, where up to 100 guests can be served in the beautiful surroundings of the villa. The interiors of the upstairs rooms are returned to their original to the greatest possible extent, so that the villa will again appear as it looked in the days of J.C. Jacobsen. 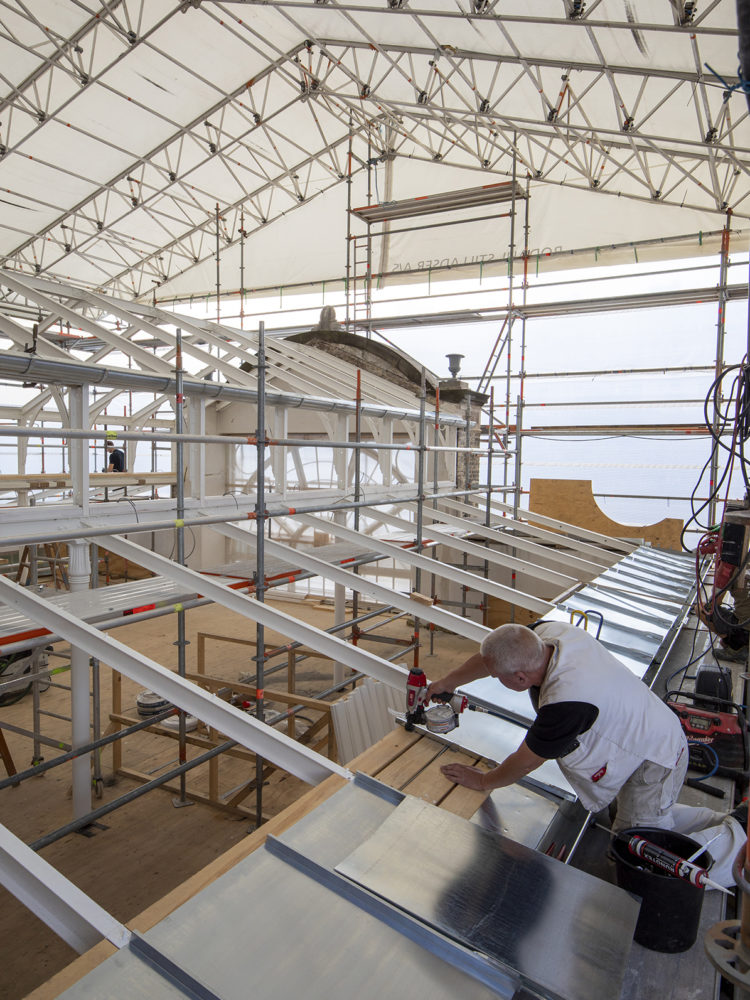 The Winter Garden's wire glass roof was leaking in several places and is now being replaced with new clear energy glass. The finish is made of zinc.
“The restoration project reinforces the story of brewer Jacobsen's ambitions for the house and connects Carlsberg Academy's contemporary function more closely to the site's cultural history.”
Peder Elgaard 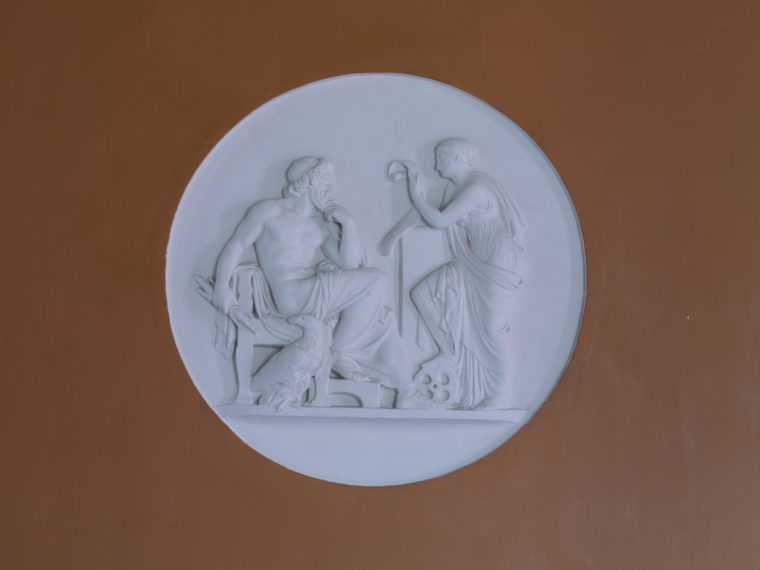 J.C. Jacobsen commissioned many works works by well-known Danish sculptors such as Bertel Thorvaldsen (1770-1844) and Vilhelm Bissen (1798-1868) for his Italianate villa. 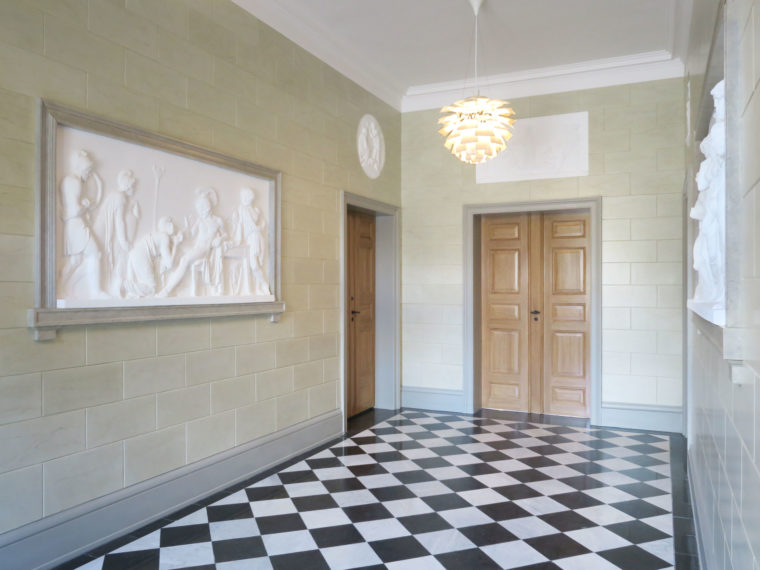 The vestibule was renovated as part of the project, and the oak-grained doors were, among others. recreated. For decades, the villa's reliefs and portrait medallions had been covered with thick layers of paint that blurred the details of the motif, but they have now been carefully cleaned.
“The Italianate-Classicist building was erected in 1853-54 according to drawings by the architect N.S. Nebelong and in collaboration with J.C. Jacobsen.” 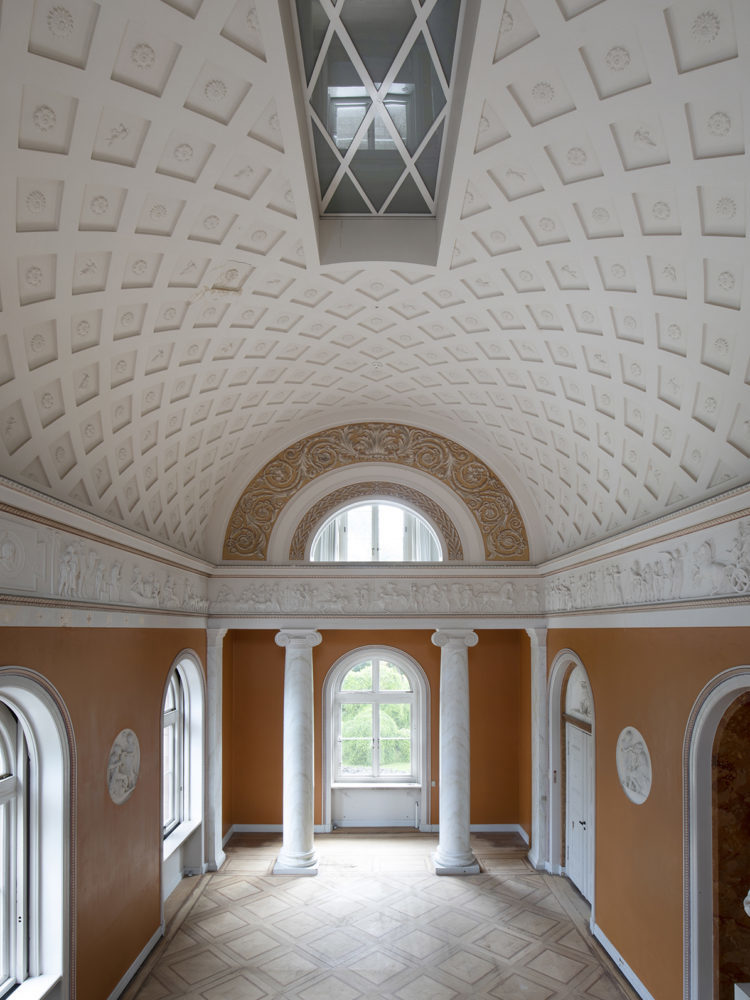 The dining room prior to the restoration 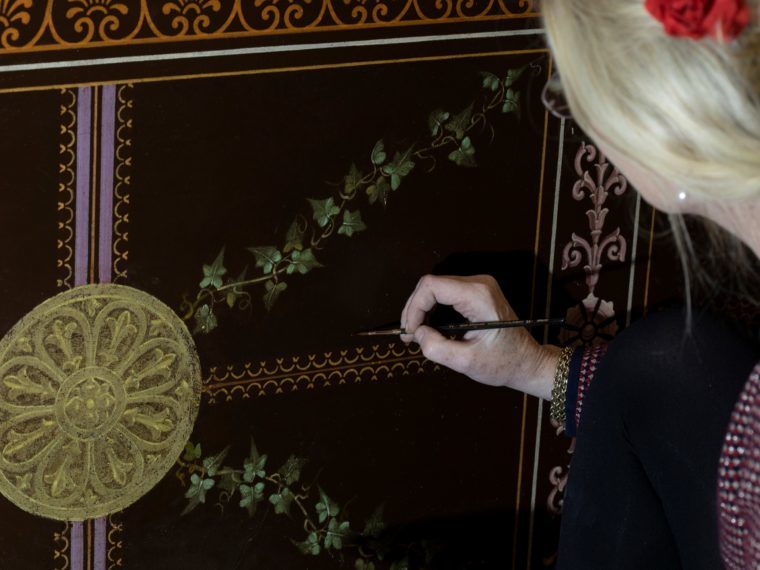 The conservators are recreating the original wall decoration on the lower walls of the villa's dining room. The artistic quality of the decorations is very high, but for decades they have been covered with Japan paper and paint.
J.C. Jacobsen's enthusiasm for Italy led him to request the Danish Rome-based sculptor Bertel Thorvaldsen to create a copy of the Roman Alexander Frieze for his villa on Valby Bakke. After painstaking cleaning and repairs, the frieze now appears with the original depth effects and differences between light and shadow. With the restoration of the original darker base colour behind the figures of the frieze, they suddenly stand out with great vividness. The plasterers' cleaning work has made the details of the frieze re-emerge, for instance the human facial expressions, the folds in the costumes and the sheep's fur.
“From 1914-1995, the villa served as an honorary residence to prominent Danish figures in science, literature or art. ” 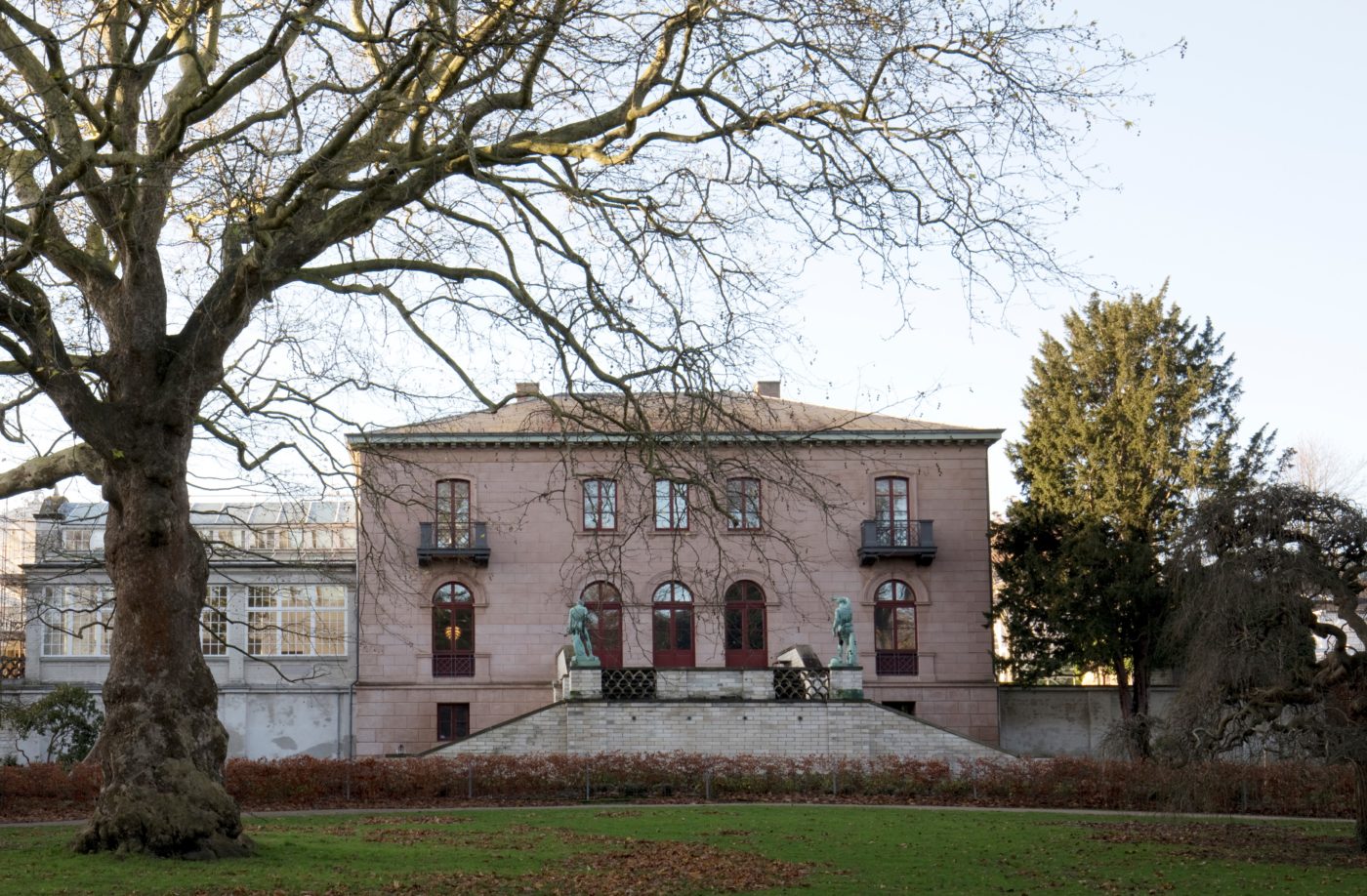 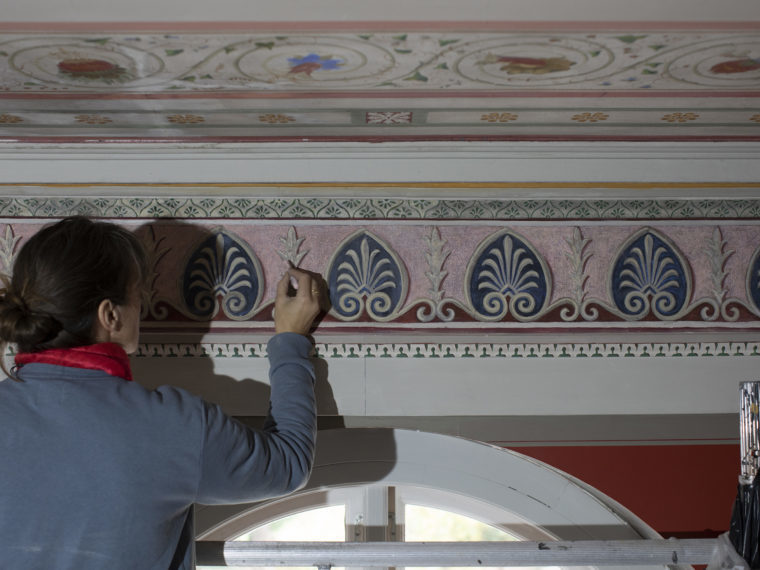 Conservator Lin Spaabæk at work in the Garden Room, where the fine, classic patterns of the ceilings and wall borders are retouched. 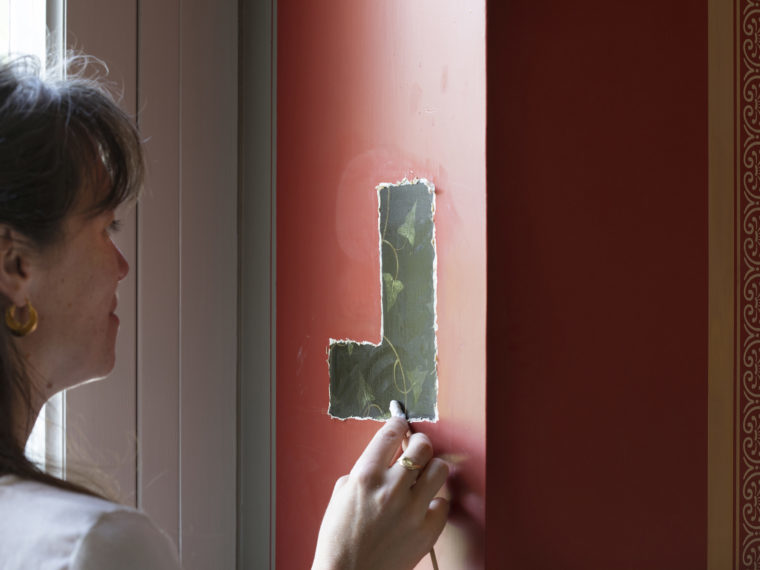 In the window niches of the Garden Room, the most beautiful birds and meandering vines have emerged under the later added wallpapers and revealed the villa's former glorious interiors.
“In 1995, the Carlsberg Foundation founded Carlsberg Academy and opened the house to conferences and symposia.”
The conservator at work in the Garden Room 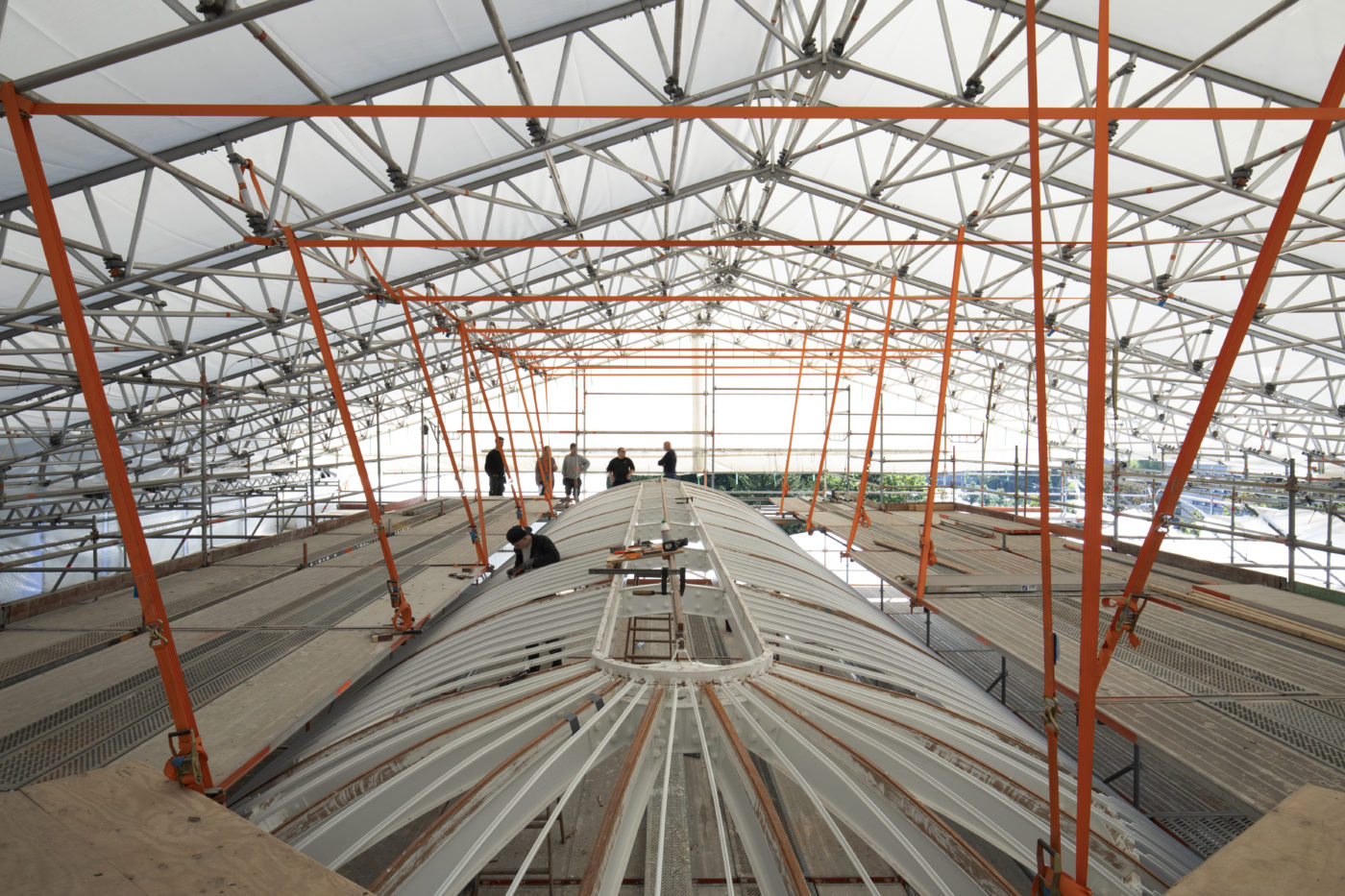 Elgaard Architecture is also responsible for the restoration of the villa's two greenhouses, the Winter Garden and Pompeii. Above is the barrel-vaulted roof over Pompeii, where the approximately 2100 panes are carefully numbered, dismantled and deposited. Once the steel structure has been cleaned and corrosion-protected, all the glass, which for the most part is original, is reassembled.