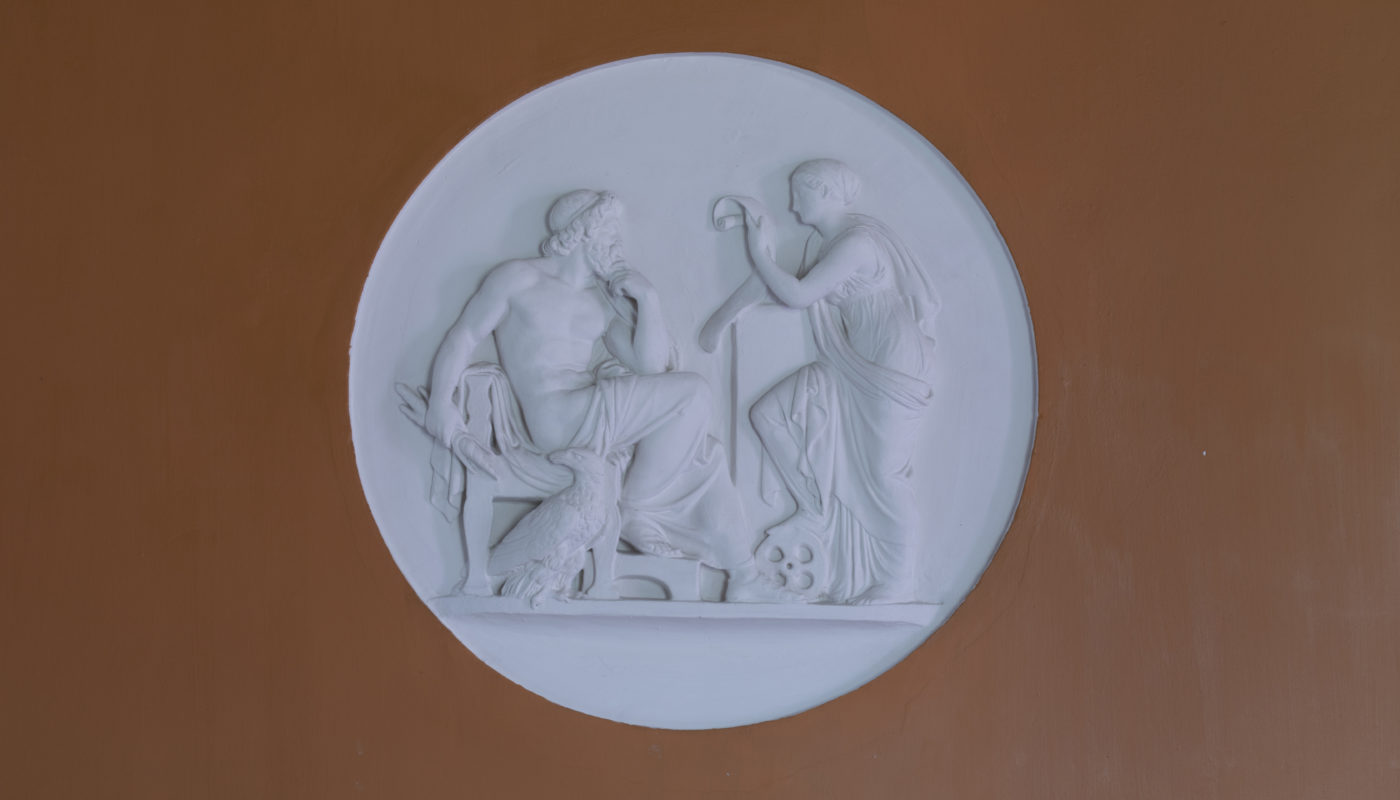 Our own star sculptor, Bertel Thorvaldsen (1770-1844), is celebrating his 250th anniversary today, an occasion which is of course commemorated at Thorvaldsen’s Museum in Copenhagen. However, elsewhere in the capital the sculptor’s works are also reminding us of his genius: At Carlsberg Academy, which we are currently restoring. The academy is also known as the Honorary Residence, but it was originally built as the brewer J.C. Jacobsen’s (1811-87) private home in Italianate villa style in the years 1847-53 near the Carlsberg Breweries on Valby Hill. The greenhouses Vinterhaven (1853) and Pompeii (1876-78) also form part of the complex.

As the brewer was very enthusiastic about Italy’s ancient art and culture, he acquired a number of Thorvaldsen’s works for his house. Bertel Thorvaldsen spent 40 years in Rome, where he created a great number of ​​beautiful sculptures for the European elite. Therefore, you can find a copy of Thorvaldsen’s famous Alexander frieze in the dining room of Carlsberg Academy, the original of which (1812) hangs in the papal palace Palazzo del Quirinale in the Italian capital.

Brewer Jacobsen’s guests could thus feel a little closer to the wonders of antiquity and follow Alexander the Great’s entry into Babylon up close, while ancient gods and heroes looked down at the dinner parties from their portrait medallions in the dining room. In fact, brewer Jacobsen had three Danish and three ancient “house gods”, and Thorvaldsen was one of the Danish ones whom he valued very highly. In the video below, you can watch the conservators re-establish the original look of Thorvaldsen’s Alexander frieze.

The brewer held his traditional candlelit Friday dinners with 15-18 of his academic friends, artists and intellectuals gathered around the dining table, and many and long speeches were often delivered on these occasions. “The gods are at the table,” said Professor Rasmus Nielsen; you were often a little high-sounding in those days,” the brewer’s son Carl Jacobsen (1842-1914) later recalled about the cheerful Friday sessions that took place in the villa at that time. As a boy, Carl himself was allowed to watch the dinners from his hiding place on one of the dining room’s two balconies.

The gods in plaster are still present both in the dining room and several other places such as in the vestibule, where reliefs with classic motifs from Thorvaldsen’s hand are also on display. And they are now, along with the rest of the brewer’s private residence, being restored by Elgaard Architecture. Conservators, painters and plasterers are currently uncovering, revealing and restoring the beautiful interiors of the past, which have been obscured over time.

For decades, the reliefs have been covered with thick layers of paint that have blurred the details of the motifs. After painstaking cleansing and repair, the reliefs and the Alexander frieze will now reappear with the original depth effect and play between light and shadow. With the restoration of the original darker base colour behind the frieze’s figures, they have suddenly emerged with great vividness, and the plasterers’ cleansing work has recreated the details of, for example, human facial expressions, the folds in the robes and the sheep’s fur.

In this way, Thorvaldsen’s spirit and works prevail and are preserved for the future in this historic place in Copenhagen 250 years after the sculptor was born, and at Elgaard Architecture we are proud to be part of that.