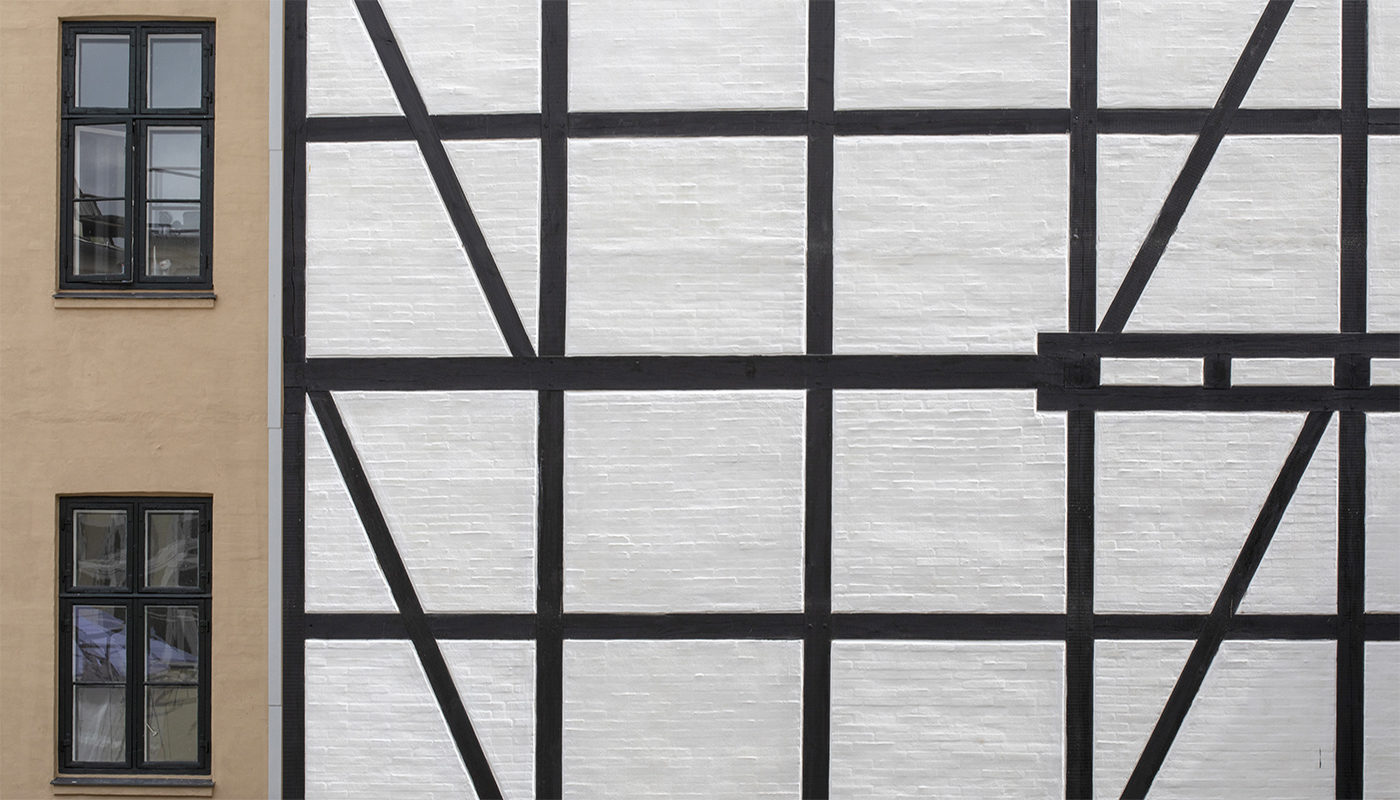 The rear house in Antonigade 9 in central Copenhagen was in dire need of refurbishment, as the woodwork in the half-timbered building, which was erected in 1766, had decayed and had extensive rot and fungal damage after a failed refurbishment in the last decades before the turn of the millennium. Therefore, we have now rebuilt the house according to old principles and with the traditional craftmanship in focus in order to preserve this piece of cultural heritage. In future, the building will again be used for residential and mixed-use purposes.

In 1531, Antonigade is described as Lille Pilestræde in connection with the sale of a property in the street, which belonged to the Antonite convent in Præstø on Møn. After this Antonii House the street was called Antonistræde. Antonigade 9 was built by Hans Næss in 1766. Hans Næss (1723-1795) was an architect and teacher at the Royal Danish Academy of Fine Arts and was strongly influenced by the style of architect Nicolas-Henri Jardin (1720-99) and from 1770 also by architect C.F. Harsdorff (1735-99). The classicist façade of the front house (1766) was designed by Hans Næss along festive, French lines - with garlands and flower wreaths. The richly decorated façade stands in stark contrast to the basic expression of the rear houses. 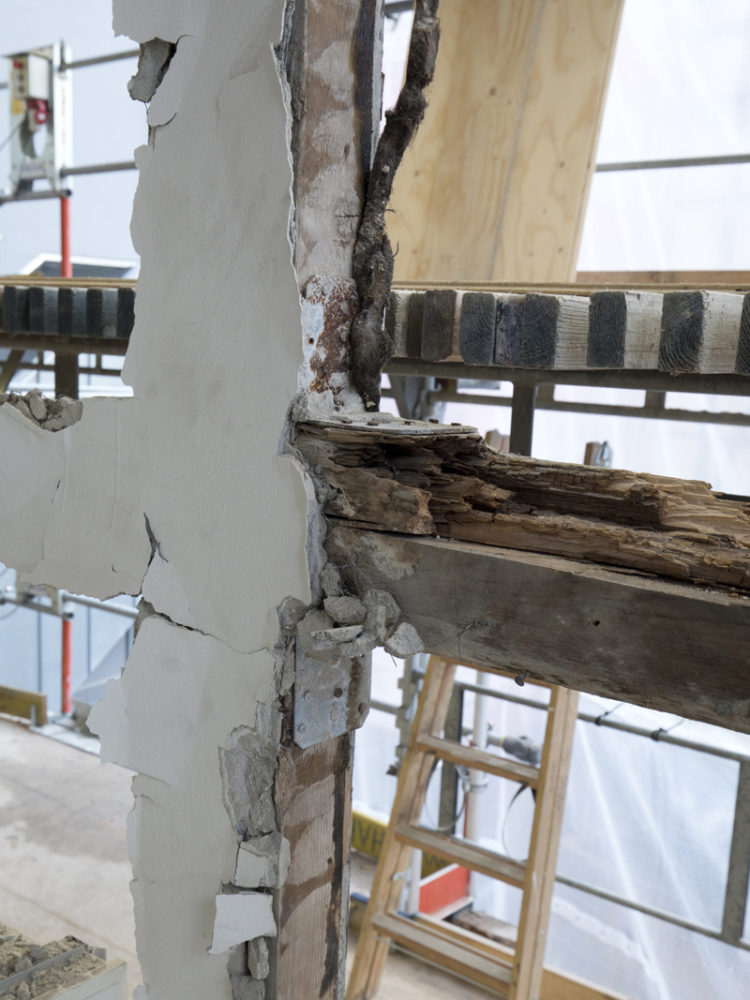 All timber in the west and north walls of the rear house was unfortunately badly damaged and a total replacement was needed. Normally, we aim at preserving as much of the historic constructions as possible, but in this case the wood (some of which was actually only a few decades old) was so damaged that we had no choice but to start all over again. Wrong materials - steel fittings and soft sealant - had led the moisture into the wood and there was major rot damage. One piece of timber at a time was replaced - and the rest of the construction supported by patient "soldiers" in the meantime. 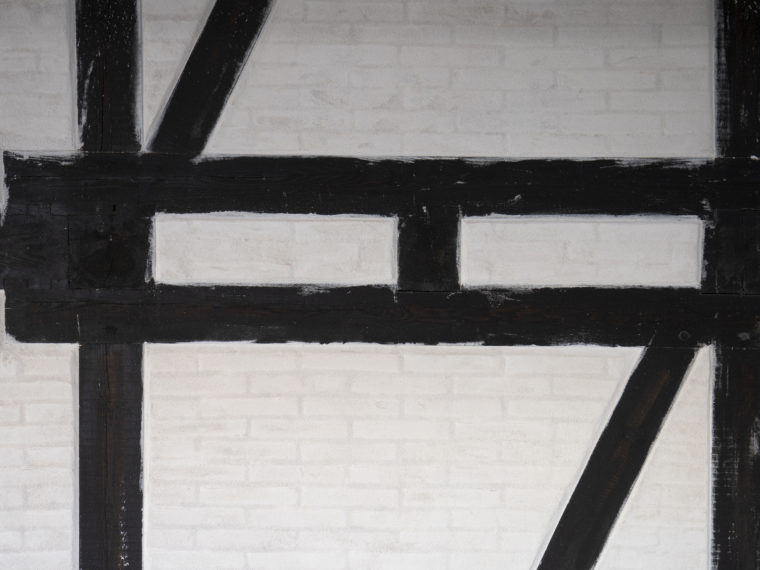 The reconstructed timberwork in the listed house has been treated with the same materials that would have been used at the time of its construction - whitewash and wood tar. The photo shows how the timber constructions of the rear and front houses are intertwined. The beam ends belong to the front house, while the beams to the left belong to the rear house. 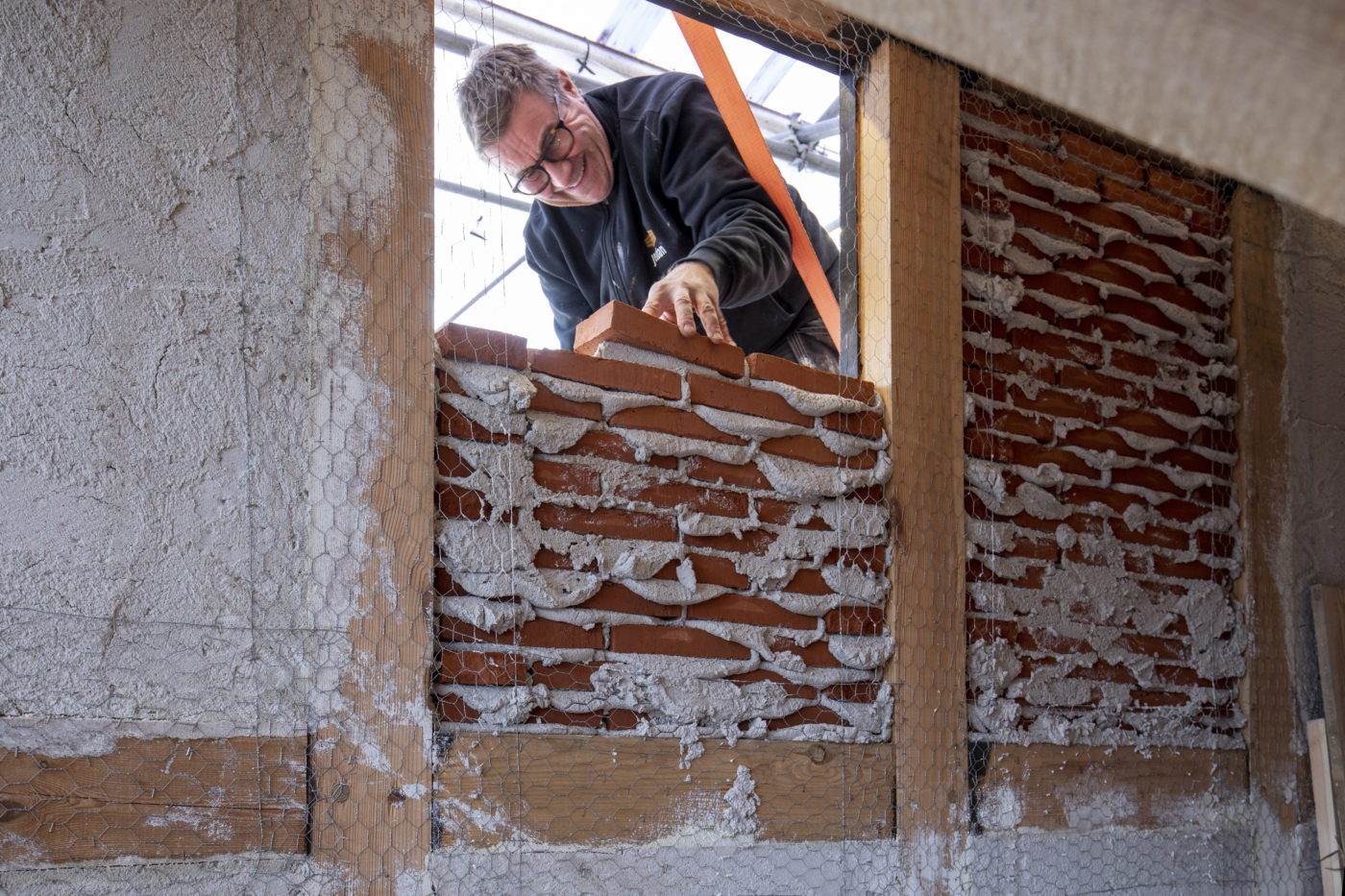 The new half-timbering consists of solid pine timber and soft-smeared Flensborg bricks, which have been layed and grouted with clean lime mortars.
“The reconstructed timberwork in the listed house has been treated with the same materials that would have been used at the time of its construction - whitewash and wood tar.” 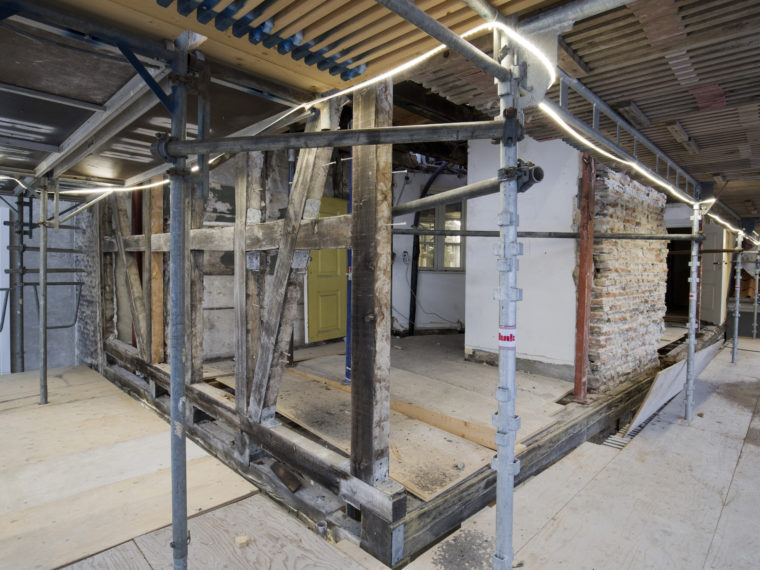 The original state of the house 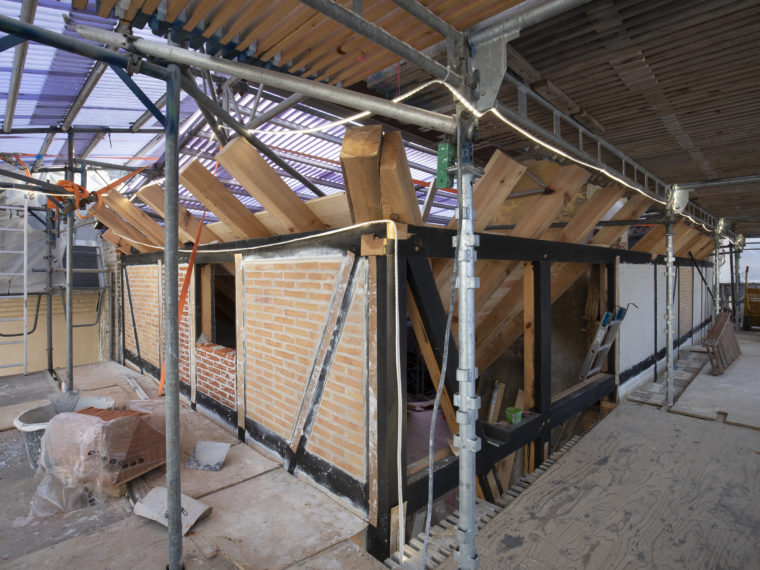 All timber joints were made in the traditional way - without metal fittings that would quickly transfer moisture into the wood. The inside of the new half-timbered outer walls is insulated with capillary-active mineral insulation boards. 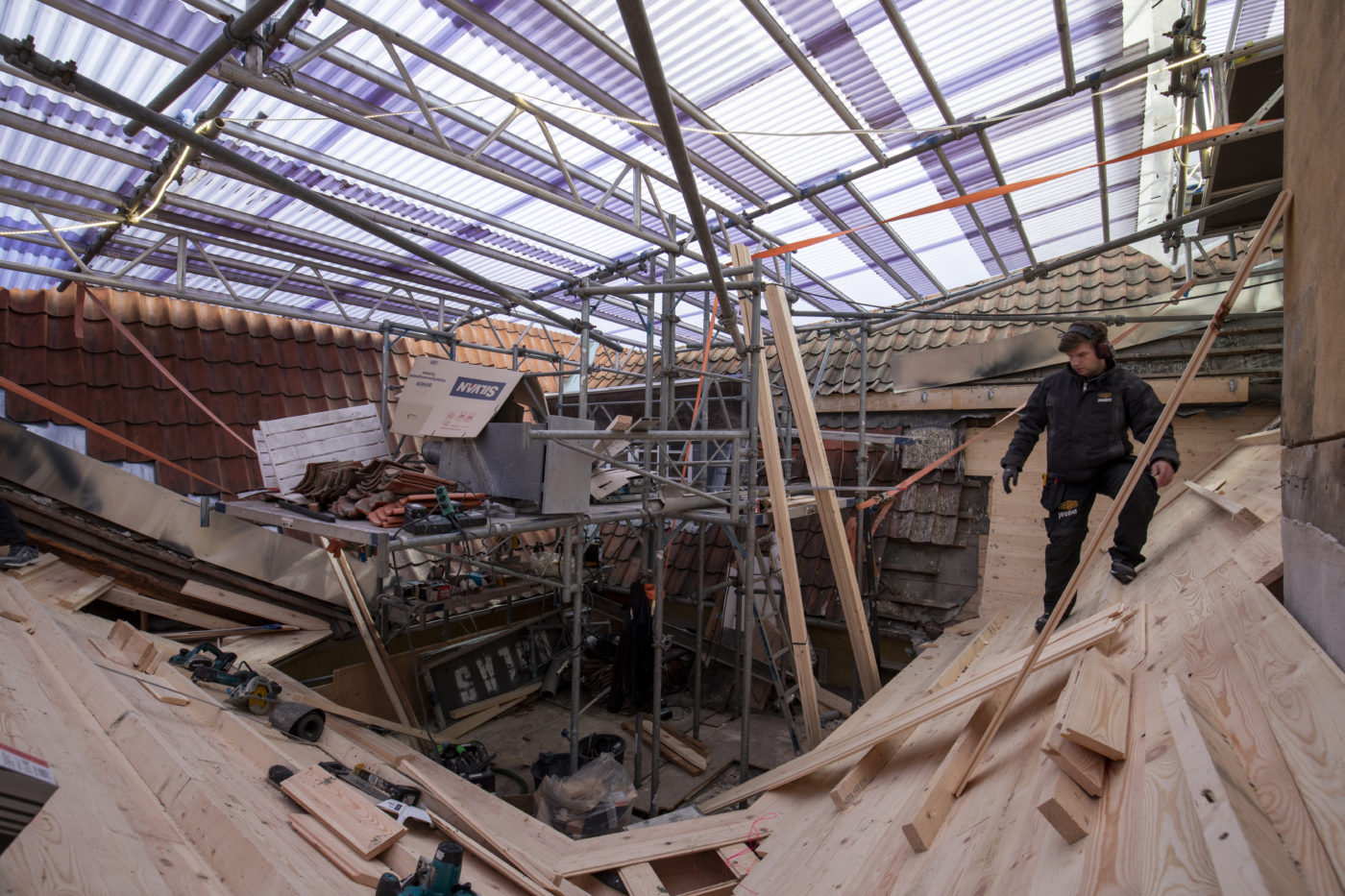 The courtyard must be one of Copenhagen's tiniest with its 20 m2. Once upon a time it was the norm - now it is an exception. The diminutive courtyard is mentioned by the Agency for Culture and Palaces as an important reason for expanding the listing of the front house to also include the rear and side houses in 2009. The roof construction on the side house and part of the rear house has been renewed, and a new underroof of boards and cardboard has been established. 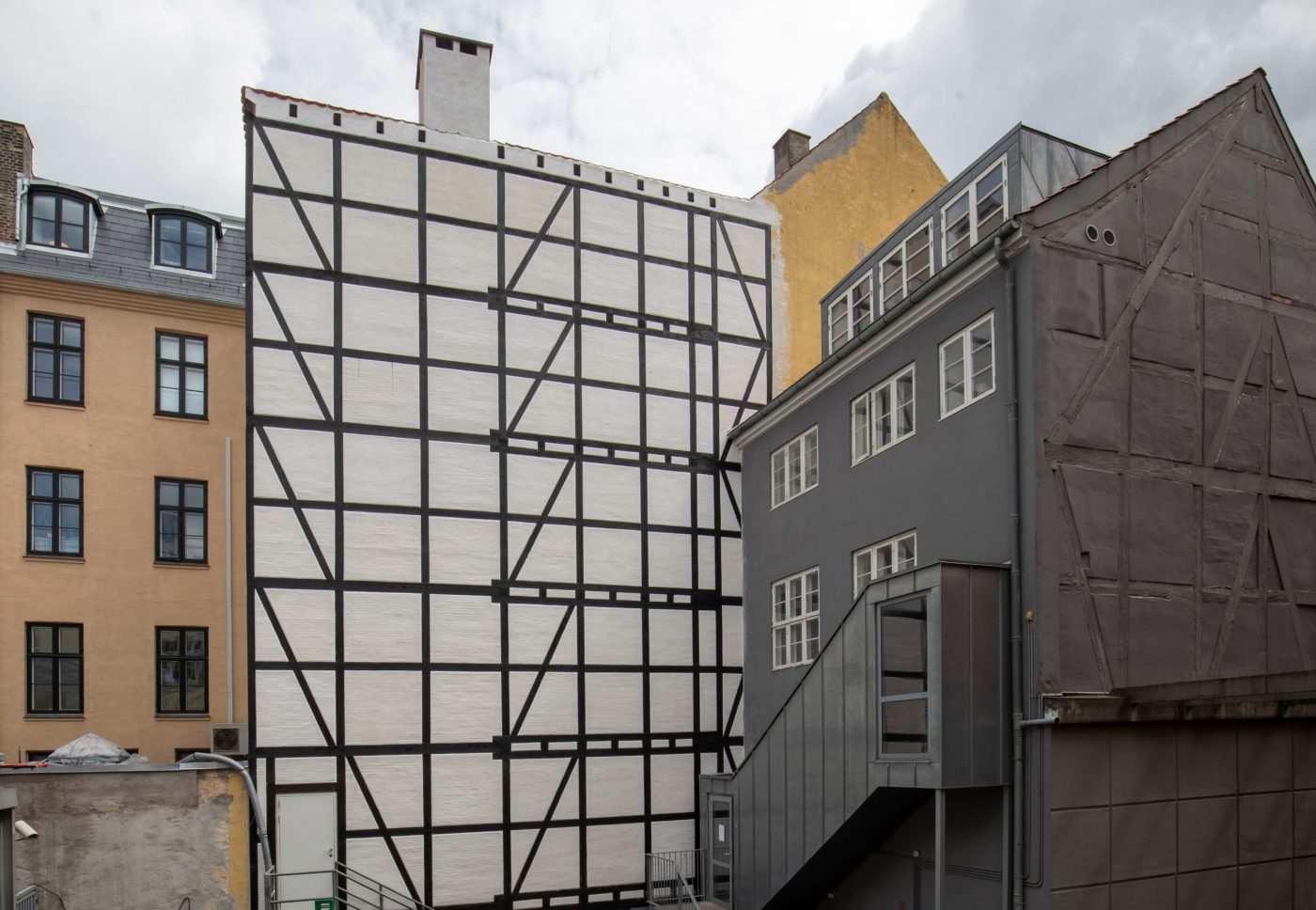 The rear house and its new half-timbering completed