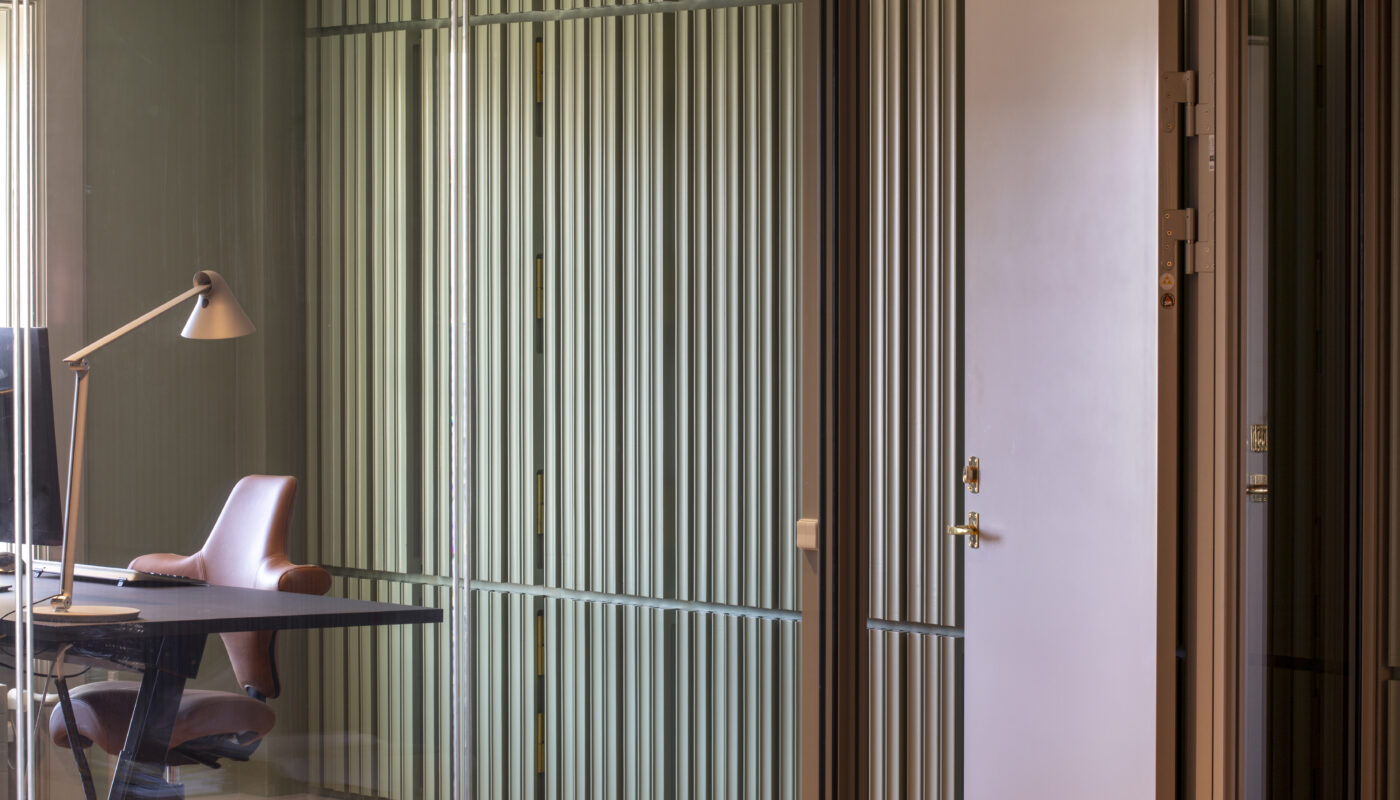 The Royal Danish Academy of Sciences and Letters

Elgaard Architecture has redefined and modernised the executive floor of The Royal Danish Academy of Sciences and Letters with its root in the Academy’s wish for a contemporary workplace stimulating cooperation, dialogue, and openness, internally and for the guests of the house.

The quality and detailing concurrently re-establish the connection between the second floor and the other floors of the building. A discreet, but yet comprehensive improvement of the indoor climate and acoustics has additionally been another fundamental part of the project. KVDS had asked Elgaard Architecture for help in programming and shaping a contemporary workplace allowing space for informal meetings, which mirrored the Academy’s request for openness and dialogue-based cooperation internally as well as externally. At the same time the floor had to convey the feeling of being a natural extension of the remaining floors, and thereby reflect the connection to Carlsbergfondet, who owns the building and whose administration is placed at ground floor.

To be able to accommodate the requests of the KDVS we have minimised the number of corridors and re-established the central room on the second floor. This originally functioned as a storeroom for books.  This has changed the flow on the floor allowing co-workers naturally cross each other’s paths on their way to the kitchenette or printing facilities.

The central room has been decorated as an informal lounge area where co-workers also can come together for minor workshops, ad hoc meetings or for a coffee chat.  The room functions furthermore as a waiting room and is occasionally used for displays.

The project has maximised the number of office spaces, but at the same time opened up and created cohesion between functions, i.e., through glazed partitions functioning as a transparent line of demarcation to the new office premises, which also lets daylight pass and flow into the recreated central space. Flexibility has been increased by creating a combination of single offices as well as two-persons offices, which also functions as smaller meeting rooms when needed. 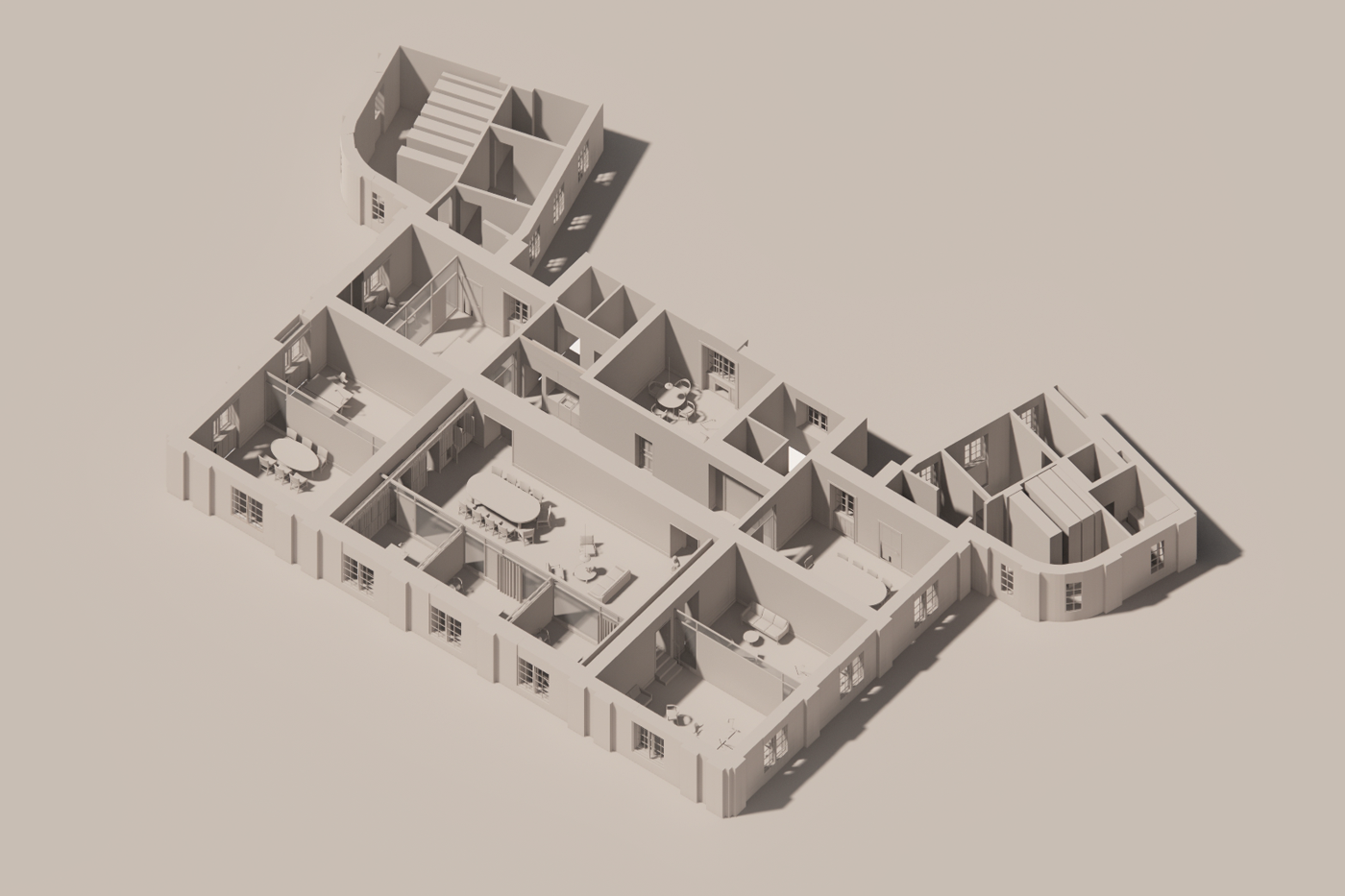 The interior hierarchy of the building

The second floor was originally very spartanly equipped without any kind of decoration. Much of the space was decorated as book storerooms for scientific publications of the KDVS.

From its onset, a strong hierarchy existed between the floors of the house which clearly differentiated between the representative- and the administrative floors.

In 1976 the architect Jørgen Bo carried out an extensive modernistic refurbishment of the second floor for KDVS. Concurrently the third floor was involved in creating a joint conference room featuring skylights. With this refurbishment the second and third floors were stylistically disconnected from the ground and first floors, and the hierarchy between the floors was erased. Coincidently, the layout of the second floor was changed into a line of closed cell offices and corridors within the central room of the floor, which previously served as a book storeroom. 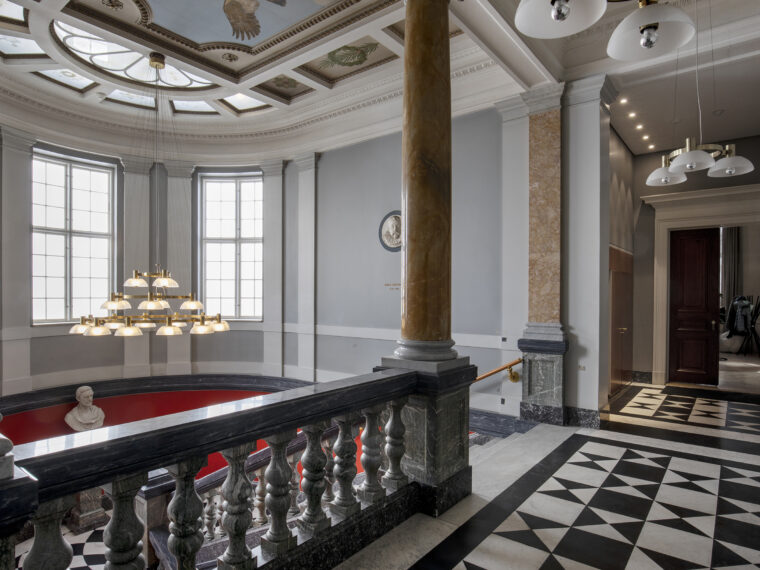 The representative stairwell in neoclassical style 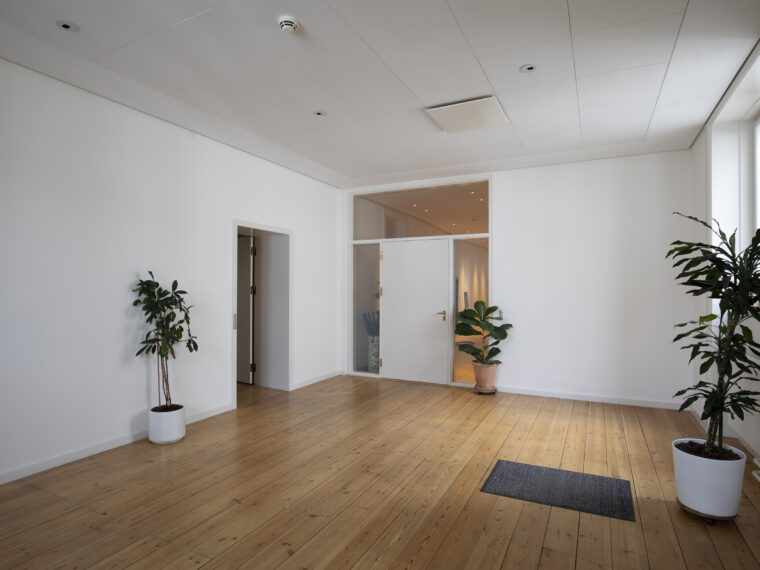 The administration of the KDVS on the second floor looked stylistically detached prior to refurbishment
“By re-creating the original layout, we designed an interior, which in its simple design and with a very high-level of detailing and quality in the execution replaces the floor within the significant hierarchy of the building, which manages to inspire co-operation and informal meetings. ”
Peder Elgaard

Replacing the 2nd floor within the strict hierarchy, which existed between the floors of the house has been a guiding principle. Furthermore, it was imperial that the material of the new internal fit out as well as craftsmanship were corresponding with the high quality of the historicist interiors.

By removing a substantial part of the refurbishment from 1976 and recreating the large open room of the floor we were partly able to accommodate the current needs of KVDS and concurrently rethink the internal fit out of the floor in relation to the historicist interiors.

New glazed partitions create transparency and enhances the experience of the original layout. The former book storage function of the floor still exists as a leading identity through the installation of a new shelving unit along the transverse masonry partitions. The new suspended ceilings and shelving walls are aligned according to the proportions and materials of the building referencing the classical design. Coincidentally, they hide complicated techniques improving the indoor climate. 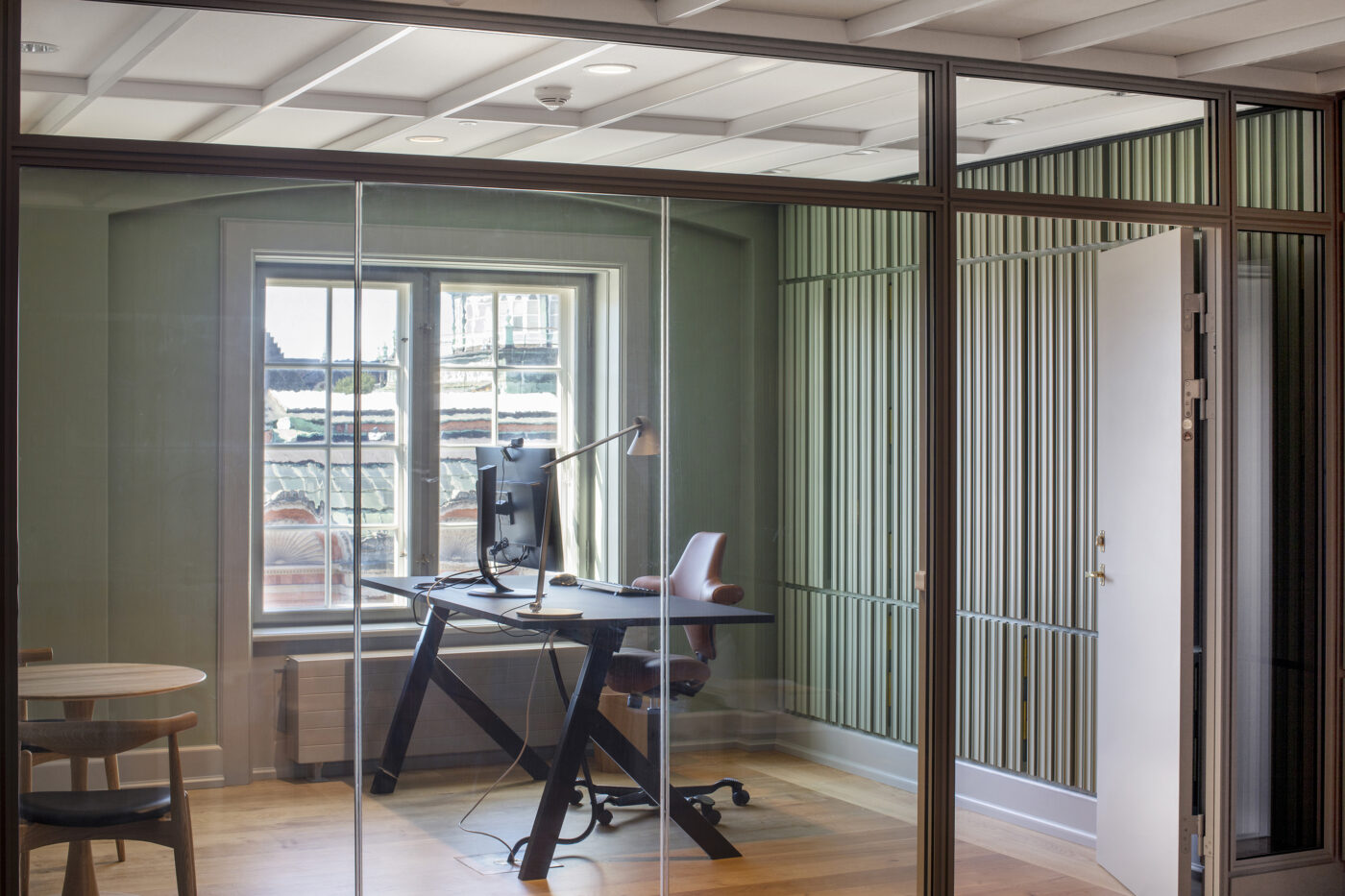 Office space for one employee. The glass wall brings light into the centrale space. 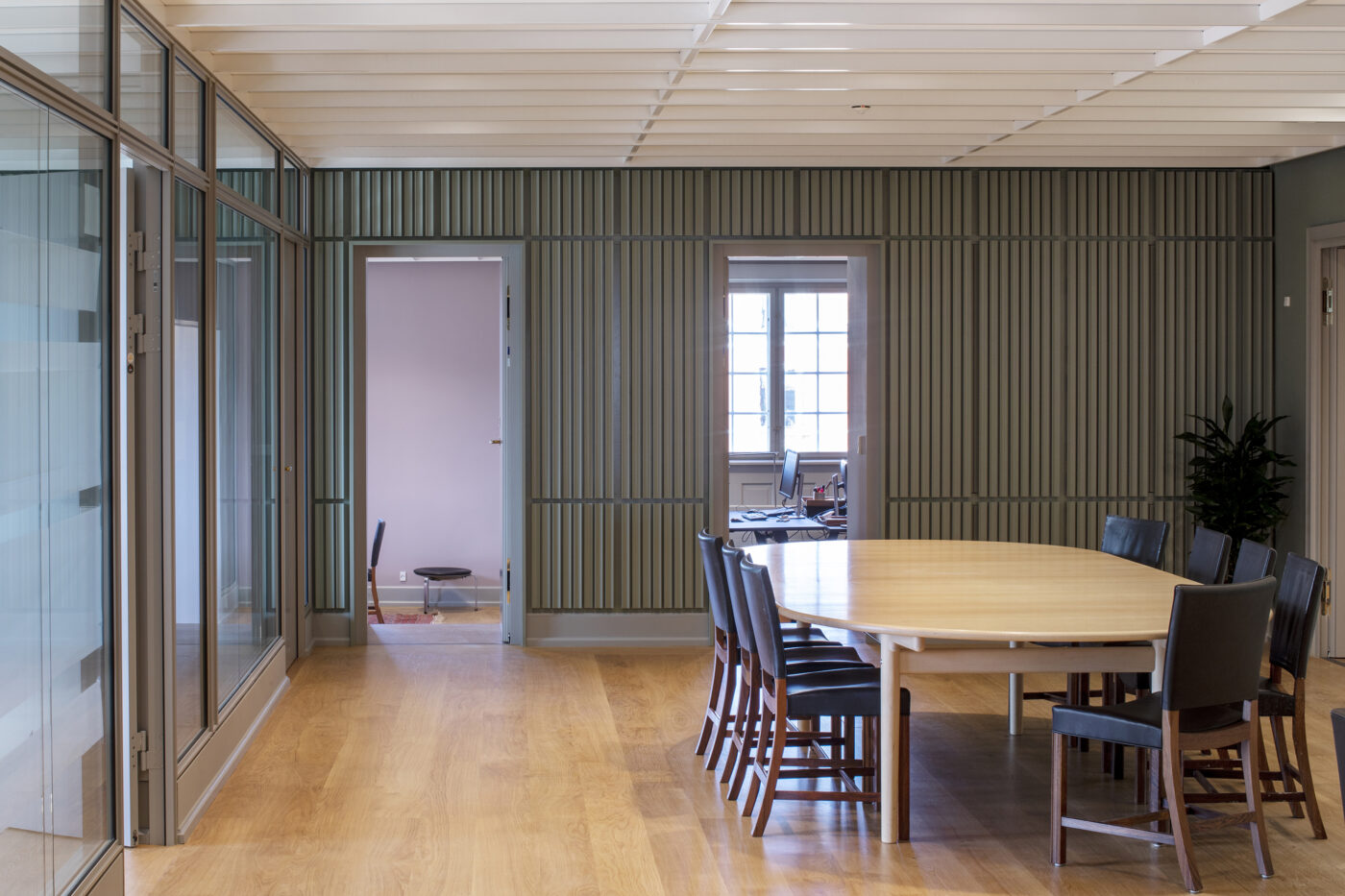 The central open plan of the floor has been recreated and glazed partitions facing the offices creates openness and opportunities for contact.

It has been a vital part of the project to improve the indoor climate of the entire floor, as temperatures especially in summer were high. By establishing a suspended ceiling which proportions refer to the classicism on the other floors, we were able to install a very advanced air conditioning system and eliminate the climatic problems.

Moreover, the technical installations are concealed within the walls, which withal are carried out resulting in the acoustic regulation, which also has contributed positively to the physical working environment.

All internal fit outs and fixtures are executed at a very high level of detailing elegantly referring to the classicist elements on the additional floors of the house. 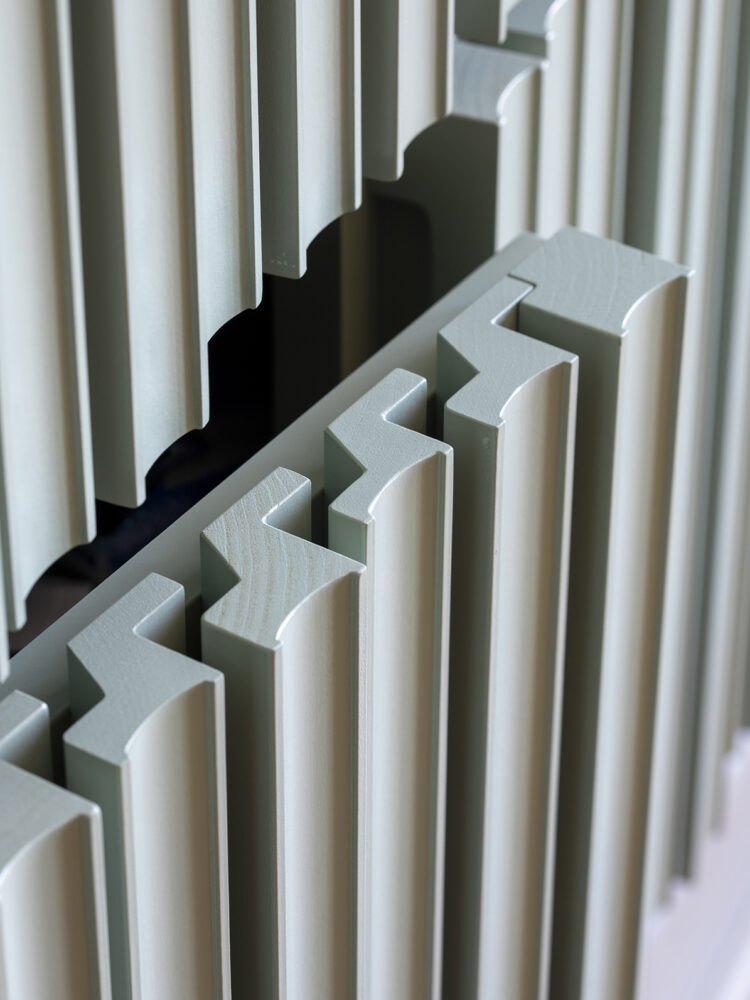 The craftsmanlike execution and detailing are a natural extension to the high quality of the interiors on the additional floors of the house. 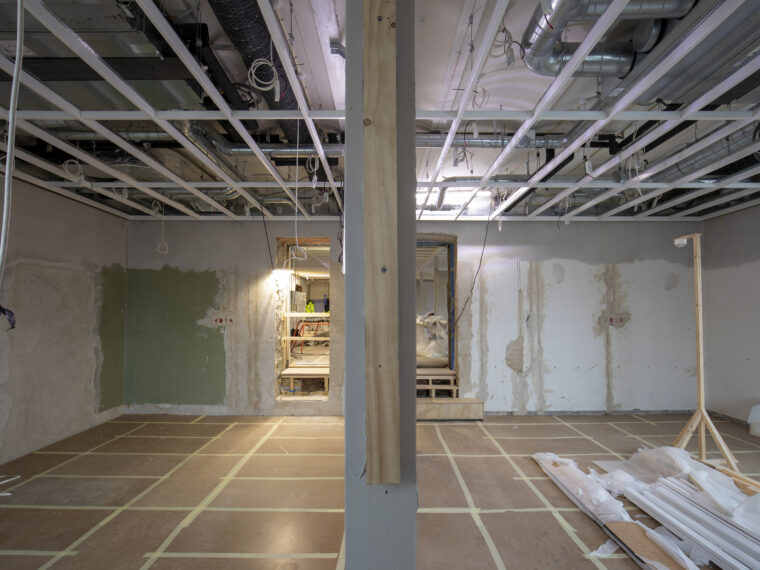 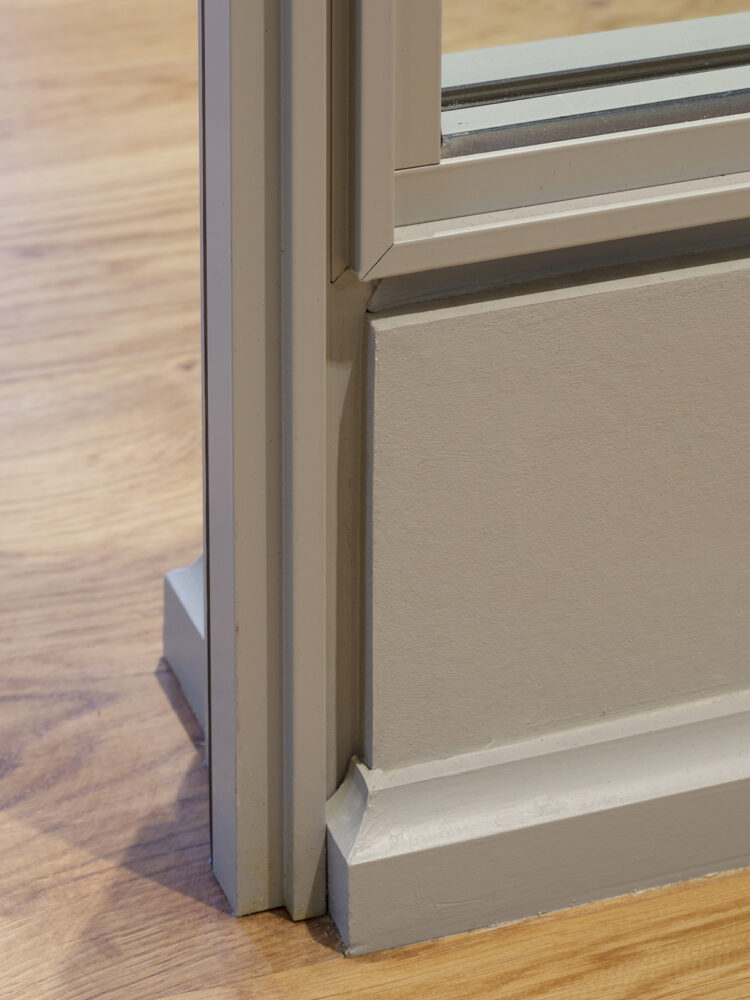 Partitions are carried out as a combination of full walls and glazed partitions with details which elegantly creates a connection to the classicist style. 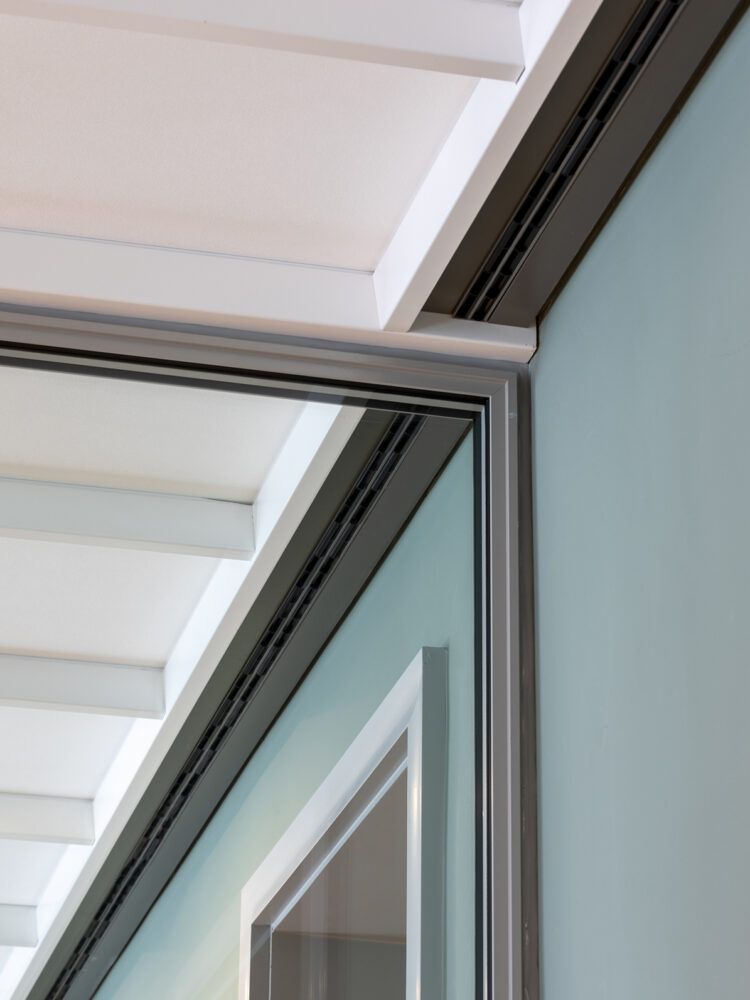 Ceilings and partitions increase the amount of daylight and provide an opportunity to work with other lighting. 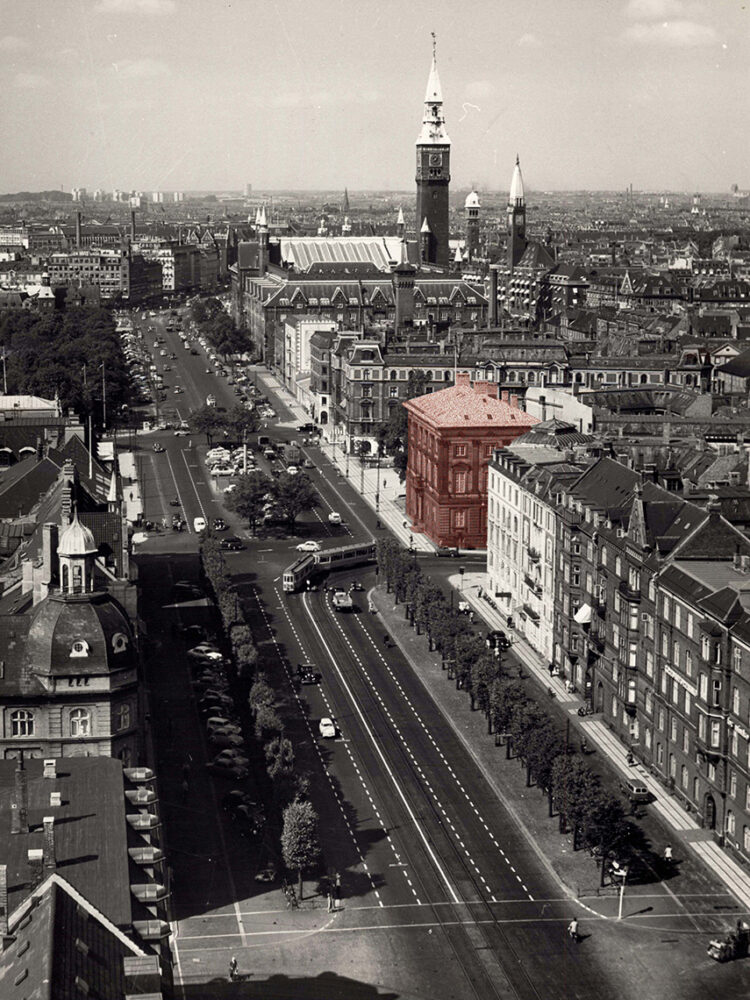 The Royal Danish Academy of Sciences and Letters (KDVS) and The Carlsberg Foundation (CF) have a vital joint task in promoting the position of science in Denmark, and the founder of Carlsberg, brewer J.C. Jacobsen, wished that the Foundation and the Academy would have joint domicile.

The administration of KDVS is located on the second floor within the grand building. At ground floor level the secretariat of the Carlsberg Foundation is placed and on the first floor level the well-equipped representative offices are situated with its classicist inspired interior is a significant and voluptuous example of Danish historicism.

On the third floor a meeting hall has been designed which can be used for hosting receptions and parties. It was designed by Jørgen Bo in the 1970s and has been redecorated several times.