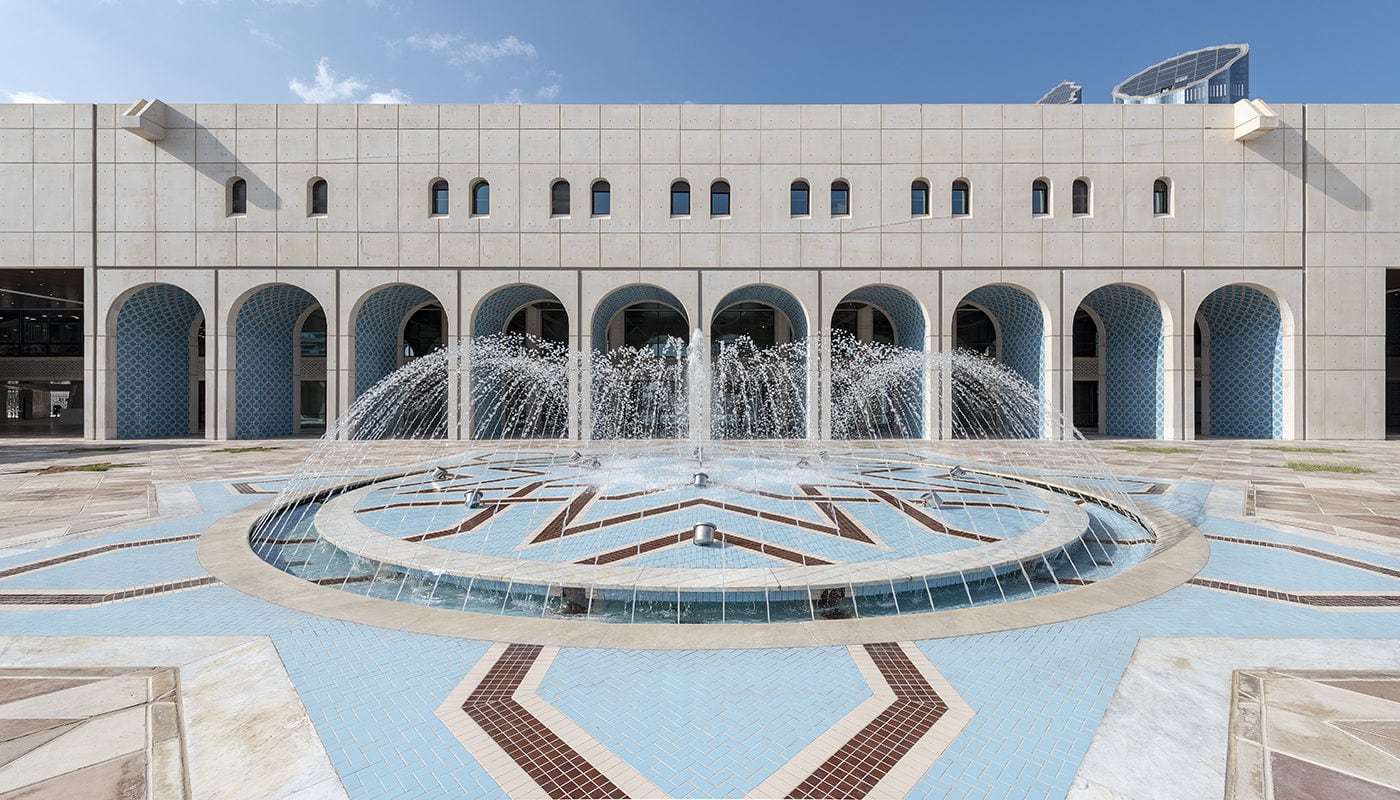 For years, concrete has had a bad reputation, but gradually people are realising how concrete and its construction principles are an important part of the built cultural heritage of the 20th century. This calls for us as professionals to take an interest in the history and development of the material.

A new palette of restoration challenges
In recent years, Elgaard Architecture has restored several very fine, listed concrete buildings. In Denmark, we have, among others, completed a restoration of architect Oscar Gundlach-Petersen’s Palace Garages from the 1930s in central Copenhagen and the Naval Mine Warehouse from 1917 on the ramparts of Christianshavn, when it was transformed into the new Restaurant NOMA 2.0 by BIG. Internationally and in collaboration with CEBRA Architecture, we completed the Cultural Foundation in Abu Dhabi – the country’s first and Louis Kahn-inspired cultural centre from 1981 by The Architects’ Collaborative (TAC) – which was restored and modernised.

The three projects differ from each other as they have each presented different challenges both in terms of construction technology and cultural heritage: At the Naval Mine Warehouse, which as a fortification is built into the 17th-century Ramparts of Christianshavn and is therefore also a protected historic site, we were applying a new function which required new solutions in terms of comfort, indoor climate and technology, etc. In the Palace Garages, where salt and water from the cars’ tires accelerated the decomposition of the concrete and reinforcement, we experimented with copying the pattern of the original formwork in a new carbonation-inhibiting facade casting. And finally in Abu Dhabi, we faced challenges with extreme humidity, sandstorms, a high groundwater level as well as the restoration of an architectural expression that stood razor sharp in the memory of any emirate.

The concrete constructions have developed considerably since the 1930s, and the historical techniques and the way in which concrete is cast and used today differ greatly. Therefore, it is very important that we make decisions on the basis of a solid knowledge of the history of the material and the development of the construction techniques. In this way, we can help develop specific solutions for the restoration and maintenance of the historic concrete structures, which is fundamental to creating sustainable solutions that preserve and develop the cultural heritage.

A “new” material with a long history
There are many opinions about concrete – from one extreme to the other – and especially the concrete buildings from the 1960s and 1970s have had a bad reputation. However, the “new” material is somewhat older than most people think and has been used since Antiquity; the Pantheon in Rome is a good example of an early concrete structure. The Romans were large-scale consumers of concrete, but when the Roman Empire collapsed, the craftsmanship went into oblivion.

An intermezzo of hundreds of years followed before the mason Joseph Aspdin invented the Portland cement in 1824. However, it was gardener Joseph Monier’s irritation over cracked, cast flower pots in the Tuileries Garden in Paris that made him embed chicken wire in the concrete pots in 1846. A feature that later formed the basis of the construction method of Monier partitions and ceilings. Monier was hardly aware of how much his invention would revolutionise the construction industry.

A few years later, in 1852, the industrialist François Coignet began experimenting with reinforced concrete as a building material in the Paris suburb of Saint-Denis, and the following year he built the world’s first iron-reinforced house, Maison Coignet, which still stands today. A four-storey house, in which almost all building parts are cast in reinforced concrete – le béton armé. In 1856, François Coignet patented the reinforcing bars that we know today.

In Denmark, the military built large and heavy fortifications from the 1850s until the beginning of the 1900s in which reinforced concrete became the primary building material. In 1926, the Bauhaus school revolutionised the approach to the material and with its manifesto created a new lightness in the architecture that paid homage to glass, iron and reinforced concrete. In the coming decades, the use of reinforced concrete as a building material exploded and, together with an expanding catalogue of building materials, provided an opportunity to develop new and unconventional technical solutions, challenging and optimising existing processes and constructions. An approach that resulted in a whole new range of architectural tools and forms of expression.

It was untested territory.

The built heritage of the 20th century needs attention
Currently, we are beginning to see the long-term consequences and challenges of the construction revolution of the 20th century. The vulnerability of several of the older concrete buildings to the passage of time and the weather conditions has become apparent. The natural degradation of the concrete, which in the long run leads to porosity, moisture penetration and damage to concrete and reinforcement, means that many of the historic concrete buildings, bridges and facilities face extensive renovation and restoration.

There are many architectural gems of this kind, and they are part of our common built heritage and important testimonies of a modernist and late modernist building typology. Both nationally and internationally, architects and authorities have been rather belated in appreciating and praising the concrete architecture, and the listed or conservation-worthy concrete buildings are few; for instance, Maison François Coignet did not become a protected building until 1998 and is today in a very poor condition. With the initiative “100 from the 20th”, the EU’s InnovaConcrete initiative tries to create awareness of these fantastic works around the world together with other organisations such as ICOMOS and DOCOMOMO.

Without François Coignet’s groundbreaking work almost 170 years ago, we would not have had this at times very expressionist part of the cultural heritage – types of buildings that present challenges with their visible in-situ cast concrete which are incredibly exciting to work with as restoration architects.